University, reflects on how far we’ve come in the fight against HIV, and looks forward with renewed optimism towards a future without AIDS.

World AIDS Day is a time for reflection. This 1 December will be my 10th living with HIV, a virus that without treatment can damage the immune system and lead to AIDS.

I received my fateful phone call on 2 January 2007. It was a life-changing moment for me, but I was fortunate: effective combination therapy for HIV had been first introduced more than a decade earlier. I would have to find a way to live with this virus. Over time, and with the support of friends and my family, I grew in confidence and managed to cast off the shame and stigma so often associated with HIV.

As we near the end of the fourth decade of the HIV epidemic, how far have we moved on?

The power of fear

According to the World Health Organisation (WHO), since the beginning of the epidemic in the 1980s, about 35 million people have died from HIV-related illnesses.

I remember seeing the frightening tombstone and iceberg public health campaigns about AIDS as a child growing up in the 1980s.

There are few medical conditions that generate so much fear, stigma and misinformation as HIV and AIDS.

‘In those early days, panic spread as quickly as the virus, and the perceived ‘risks’ were everywhere: cups, towels, hugs and kisses, even communion wine.’

To be clear, HIV can’t transmitted in any of those ways.

Within the past fortnight, THT – along with the British HIV Association – felt compelled to issue a statement condemning Avon and Somerset Police for stating that their new so-called ‘spit hoods’ would protect their officers from HIV.

In the late 1980s, Princess Diana was pivotal in changing public attitudes towards people with HIV and AIDS. In front of the world’s media, she shook the hand of a man with AIDS without gloves, publicly challenging the notion that HIV was passed from person to person by touch. Her son Prince Harry has recently picked up the mantle and taken two HIV tests live on camera. His first official engagement with his bride-to-be, Meghan Markle, will be at a Terrence Higgins Trust centre in Nottingham this World AIDS Day.

The power of a symbol

Many charitable causes have a coloured ribbon associated with them. The red ribbon was the first such symbol, devised by a group of artists in New York in the early 1990s – a symbol of remembrance for those lost to AIDS and a symbol of solidarity with those living with HIV.

The colour red was chosen because of its ‘connection to blood and the idea of passion – not only anger, but love’, and a ribbon selected because it was easy to make and wear with a safety pin.

The power of community

In the 1980s, on both sides of the Atlantic, the LGBT+ community came together to care for those who were sick and to fight for effective medication. David France’s Oscar-nominated film and award-winning book, How to Survive a Plague, tell the story of ACT UP (the AIDS Coalition to Unleash Power) in the States.

As someone who professes to be an HIV campaigner, I know I stand on the shoulders of giants. If it hadn’t have been for groups like ACT UP, I do wonder whether I would be alive today – would we have such effective and life-saving treatment for HIV now? Would more people have died while those first antiretroviral drugs were still in development?

Meanwhile, on this side of the Atlantic, THT was set up in the memory of Terry Higgins – one of the first people to die from AIDS in Britain – by his partner and friends.

I owe a huge debt of gratitude to all of those ACT UP and Treatment Action Group (TAG) activists in the US, and to all of our home-grown activists here in the UK. They kept pushing and pushing for better treatments with fewer side-effects, and they helped care for and support those people who became sick.

The power of language

Today, AIDS has arguably started to slip out of the lexicon. Thankfully I have never had an AIDS diagnosis, and people working in the field now prefer the less stigmatising term: late-stage HIV. I was able to access effective, life-saving treatment before my immune system became damaged. I describe myself as living with HIV – with the emphasis very much on the ‘living’ – and as unashamedly positive. I am sometimes a ‘patient’, but I am certainly not a ‘sufferer’ or a ‘victim’.

There is still no cure for HIV, and people do still die from HIV-related illnesses. People who are diagnosed late, when their immune system has already been damaged by the virus, continue to have a more than 10-fold increased risk of dying in the year following their diagnosis. The fight is certainly not over, and HIV and AIDS activism is absolutely still relevant today.

The power of PrEP and TasP

Epidemiologist Leon Gordis states that ‘prevention and therapy are all too often are viewed as mutually exclusive activities’. He says that ‘prevention not only is integral to public health, but also is integral to clinical practice’ and gives the example of the US Food and Drug Administration (FDA) approving the use of the HIV treatment Truvada as PrEP in 2012 as showing the link between prevention and treatment.

PrEP, or pre-exposure prophylaxis, is such an exciting development in the fight against HIV, where HIV-negative people use medication to protect themselves against the virus. In a number of studies, including the PROUD study, it was shown to be 86 per cent effective – and in practice, to be close to 100 per cent effective if taken correctly.

For me, PrEP is the obverse side of the same coin as TasP (Treatment as Prevention). PrEP is a way for HIV-negative people to protect themselves with antiretrovirals; treatment as prevention and an undetectable viral load are a way for HIV-positive people to stay healthy and to protect others. Having an undetectable level of HIV in your blood has been dubbed #UequalsU [undetectable = untransmittable] by HIV activists around the world. For me, it is a hugely empowering message.

I first heard about the concept of people with an undetectable viral load not being able to pass on HIV with the so-called Swiss Statement back in 2008. I had been living with HIV for about a year at that point, but I had not started medication. I started a few years later in 2010 and became undetectable within a few months. Even though I wasn’t on medication and wasn’t able to – or recommended to – start, it was hugely reassuring to me that I wouldn’t be able to pass on the virus after I did.

Actually, the body of evidence around U=U has been growing for the past 20 years. When the results of the large, international PARTNER study were released, they were further proof of what I and many others already knew and were sure of. U=U has now gained the backing of the WHO, UNAIDS and the CDC (Centers for Disease Control and Prevention) in the US, as well as 400 organisations from 60 different countries. 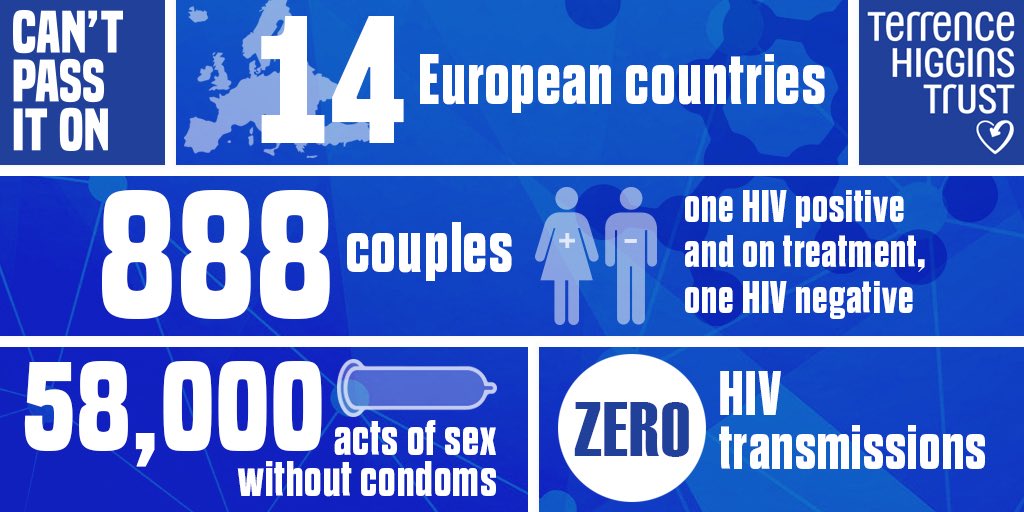 I have the infographic above with those PARTNER study results saved in my phone, as I often have to show it to sceptical or ignorant people I meet. Zero transmissions between the partners in that study is the proof that people successfully on HIV treatment cannot pass on the virus.

Even some people who are long-term diagnosed with HIV still struggle with this game-changing information, such are the emotional scars from the pre-medication era. Sadly, there are still so many ignorant people who do not even know that we have extremely effective treatment for HIV, let alone knowing about undetectability.

The power of hope

The latest figures from Public Health England, published this November, show a dramatic decline in new HIV diagnoses among gay, bisexual and other men who have sex with men for the first time since the epidemic began more than 30 years ago (a 21 per cent decline – from 3,570 new diagnoses in 2015 to 2,810 in 2016).

This decline was focussed on five central London clinics that delivered high levels of HIV testing, including frequent testing of men at high risk of contracting HIV, together with starting newly diagnosed men on treatment straight away. This ‘test and treat’ strategy has been successful in American cities such as San Francisco. One of those central London clinics is 56 Dean Street, which has a clarion call on its website: Let’s get HIV to Zero.

For the Angels in America programme, Ian Green writes:

“We have all the medical tools we need to end this epidemic for good, and to ensure those living with HIV can enjoy healthy and happy lives – but we will never get there until we end the stigma.”

How do we renew the fight against HIV and honour those who went before us? How do we continue to care for people living with the virus as they grow older, and ensure they do not feel excluded? How do we ensure everyone who would benefit from PrEP or TasP has equitable access? Could a future without AIDS be in sight? Now is the time for action.

I give my final words of hope to Prior Walter, one of the protagonists in Angels in America:

“This disease will be the end of many of us, but not nearly all, and the dead will be commemorated and will struggle on with the living, and we are not going away. We won’t die secret deaths anymore. The world only spins forward. We will be citizens. The time has come. Bye now. You are fabulous creatures, each and every one. And I bless you: More Life. The Great Work Begins.”

The disproportionate deaths of NHS staff during COVID-19

Risk and uncertainty during the COVID-19 pandemic