Freedom of religion vs LGBT equality

Dr Erica Howard and Dr Alice Donald, the authors of a new report published by the European region of the International Lesbian, Gay, Bisexual, Trans and Intersex Association, discuss the tension between religious freedom and LGBT rights and suggest that the solution lies in mediation not litigation.

The last few years have seen a number of high-profile cases where people refused to do certain parts of their job or to deliver goods or services because of their religious beliefs. There was the case of Andrew McClintock, who was a magistrate on a family panel, which makes decisions on child custody and residency. Mr McClintock did not want to give custody of children to same-sex couples. Then there was Lilian Ladele, who was a registrar who did not want to perform civil partnerships; and Gary McFarlane who was a relationship counsellor who did not want to counsel same-sex couples. The latter two cases went all the way to the European Court of Human Rights in Strasbourg. The case of the hotel owners, Mr and Mrs Bull, who refused to rent out a room to a same-sex couple in a civil partnership, was decided in the UK Supreme Court.

All these claimants were Christians who were motivated by their religious belief that homosexuality is against God’s law. All of them lost their cases.

Much media coverage of these cases emphasises a perceived clash between two fundamental human rights: the freedom of religion of the Christian individuals versus the right of lesbian, gay, bisexual and transgender (LBGT) people to equality and to be free from discrimination on the ground of their sexual orientation or gender reassignment. Such commentary is prone to invoke a broader clash between ‘religious’ and ‘secular’ worldviews, and to argue that Christianity is becoming marginalised in public life – even to the point of portraying the application of equality and human rights law as a form of religious persecution.

This view is disputed, not only by those of another, or no, religious faith, but also within and between different Christian traditions. For example, some Christians view the ‘marginalisation’ narrative as a response by a dominant, conservative Christian tradition to a loss of privilege. Public responses to high-profile cases may make conflicts between religion or belief and other interests appear more intractable or prevalent than they actually are – especially when understanding is reliant upon media reports or the views of lobby groups and is not also informed about the specific circumstances and legal reasoning in each case. Moreover, legal cases are not necessarily representative of common experience or a reliable indicator of the place of religion or belief (or specific religions or beliefs) in society. 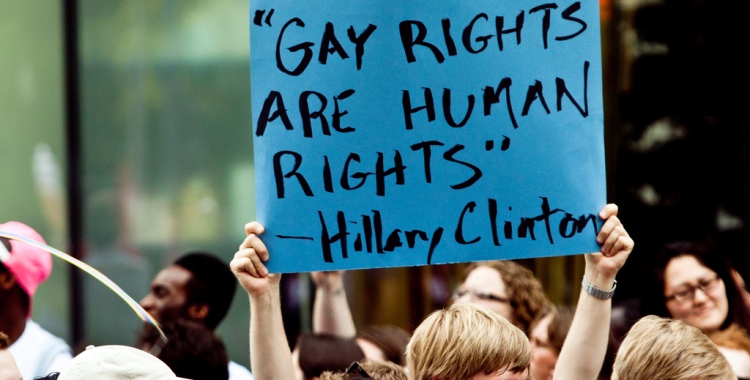 Although cases of clashing rights may be rare, there is no doubting their contentiousness. Research which we have conducted for the European region of the International Lesbian, Gay, Bisexual, Trans and Intersex Association proposes ways in which such clashes can be avoided or resolved. We base this approach on principles derived from human rights case law – principles that can be used in any situation where an apparent conflict might arise, not only within courts and tribunals but also in the wider public sphere.

We advocate that, wherever possible, differences should be negotiated outside the courts and that litigation should be avoided. This is based on our view that litigation does not resolve the apparent conflict but rather may make it worse because the adversarial character of a court case tends to magnify underlying tensions and differences. It polarises issues and puts parties in opposite corners, each stressing their own identities or characteristics.

No right to discriminate

The first principle we propose as a means to pre-empt or resolve tension is that of non-discrimination: this means that there is ‘no right to discriminate’. This principle is derived from a number of separate, though interlocking, provisions of international human rights law. In respect of claims for religiously-motivated refusals to provide goods or services to same-sex couples, courts have consistently held either that the requirement to provide goods and services to the public in a non-discriminatory way is not an interference with religious freedom, or that such interference is justified by the goal of combating discrimination.

Next is the principle of neutrality and impartiality, which means that public authorities are required to act in a neutral fashion between religions and between religious and non-religious forms of belief. This means that any protection or restriction should be generic and not focused on a particular religion or belief.

A further principle is that of respect for the right of others to believe. This is a key factor when assessing the necessity of any interference with the manifestation of a religion or belief; it establishes the duty of the state to create a ‘level playing field’ between different groups, including both those with religious or non-religious beliefs and those with no religion or belief, with one side being free to present their point of view, and the other to reject it. The principle may be summarised as ‘respecting the believer rather than the belief’.

No right not to be offended

Next is the principle of pluralism and tolerance, which plays an important role in preserving democracy. It requires that religious adherents accept that their belief systems will be challenged. But the same applies to non-believers who have to tolerate manifestations of religion or belief which they might find unpalatable. There is no right not to be offended and the role of the state here is to encourage and promote tolerance.

Another important principle is that of proportionality. This means that, where the state interferes with a right, such as the right to freedom of religion, it must choose the least restrictive means possible and must strike a fair balance between the rights of the individual and the interests of the state, employer, public service provider or the rights and freedoms of others. Whether a restriction is proportionate depends on the facts of each particular case. This means that the outcome of an individual case cannot be used as a basis for making abstract determinations about competing rights.

Finally, there is the principle that there is – and should be – no hierarchy of rights. In situations of competing rights, the proportionality analysis is not a ‘zero sum’ game, in which a gain for one side necessarily entails a corresponding loss for the other; rather, it is one in which compromise may be required form both sides. In each instance, an attempt should be made to maximise each of the rights at stake and to ensure that none is inappropriately sacrificed.

We suggest that conflicts can be avoided or minimised if both parties to a dispute follow a set of ground rules in negotiating solutions. These ground rules include that negotiations should be held with a willingness to engage in mediation and conciliation. Negotiations should be held in good faith and with openness and mutual respect to the other party’s point of view and to their right to express this view. There should be a willingness to listen to the other’s point of view and to reach pragmatic solutions. Both parties should work towards avoiding litigation wherever possible.

It is also important to avoid essentialising religions or beliefs or misattributing certain views or values to entire groups or communities, whether these are communities identified by their religion or belief, their sexual orientation or any other characteristic.

Overall, we suggest moving away from litigation as a means of resolving disputes and towards mediation, conciliation, arbitration and other non-litigation routes. This approach recognises the limitations of law in addressing complex questions of multiculturalism and social identity and the importance of finding pragmatic solutions wherever possible.

Reblogged this on SPIRITUAL WARFARE JOURNAL.